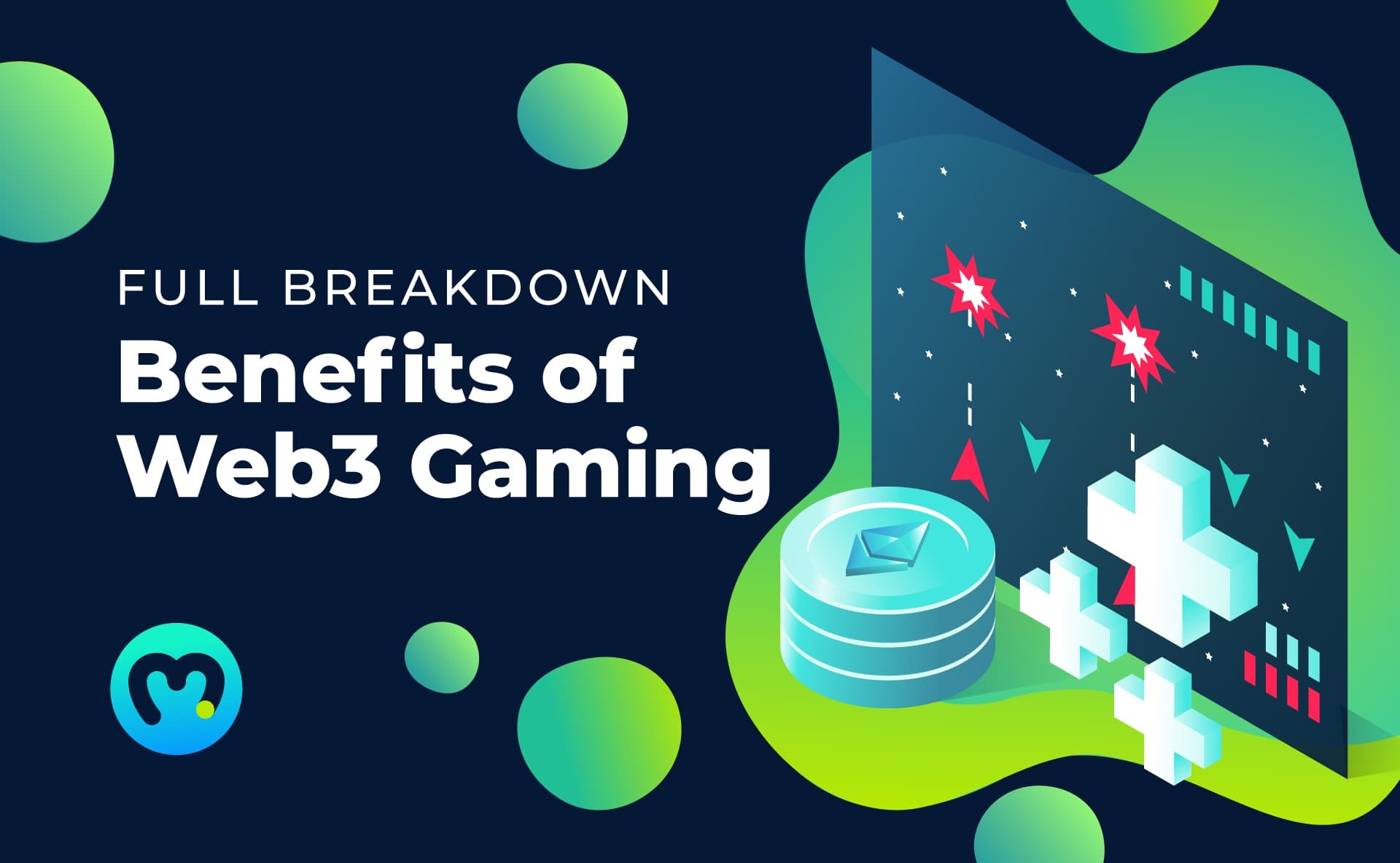 These are four key benefits that we will explore further herein. As such, you’ll be able to decide whether or not Web3 gaming deserves your attention. In addition, while many believe creating Web3 games might be daunting, we’ll look into Moralis and discover how blockchain development feels like a breeze when utilizing its platform.

Further, with this pinnacle of the current Web3 tech stack, you can use your frontend skills to smoothly transition from Web2 to Web3. Using your JavaScript or Unity proficiency, you can start creating decentralized applications (dapps) today. Essentially, Moralis is “Firebase for crypto” and is considered the best Web3 backend platform. However, our main focus in this article will be exploring the benefits of Web3 gaming, which offers countless opportunities. We’ll break things down and point out existing game examples, which you can explore further. Moreover, along the way, you will learn about GameFi and play-to-earn (P2E) concepts, which are key benefits of Web3 gaming. On the other hand, you might already be familiar with the benefits of blockchain games and want to start building. If that’s the case, create your free Moralis account and put your Unity knowledge to work.

When it comes to devs’ goals for Web3 gaming, four KPIs get the most attention. Although stated earlier, let’s take a brief look at the four KPIs:

We decided to cover the benefits of Web3 gaming by taking a closer look at how blockchain technology can help improve the above KPIs. However, before moving on, let’s make sure you all know the basics. Thus, let’s take a look at two concepts that significantly mark Web3 gaming:

It’s also worth pointing out that decentralized finance comes with many advantages that also become the benefits of Web3 gaming. As such, decentralization, transparency, and immutability become a part of on-chain games. Hence, with noble aspects on its side, a transition from “pay-to-play” to “play-to-earn” is no longer a question of “if”. We believe it’s quite obvious what will come out on top, and trends are already showing this.

As we move forward, we will look closer at each of the above-listed KPIs. That way, you’ll see the benefits of Web3 gaming on these key performance indicators. Moreover, there are specific features that impact certain KPIs. However, the overall benefits often cross over and often improve multiple aspects simultaneously. For instance, Web3 gaming significantly improves social interaction when it gets to user installs. When it comes to user engagement, there’s increased immersion in Web3 projects. As far as user retention goes, user-generated content (UGC) is quite significant. Also, when we consider user revenue, Web3 brings new and improved revenue streams to the table. So, without further ado, let’s dive into these aspects of the benefits of Web3 gaming.

As far as the first KPI goes, it is obvious that more installs mean more players. Also, more players mean a larger community. In addition, with Web3, a game’s ecosystem lives beyond the traditional borders of the game itself. If we look at traditional gaming, the community is quite limited – its build and monetization only begin when the game launches. As soon as the game developers decide to end the game services, active engagement with users becomes impossible. This significantly limits the engagement frame:

However, as the image above clearly shows, Web3 gaming adds additional dimensions that vastly improve community opportunities. For one, we can start creating an engaging community before the actual launch. We can accomplish this in many different ways. For example, by offering UGC, NFTs, and governance tokens, a lot of value and, therefore, interest from more users enters the picture. Moreover, if the game ends in the case of Web3, the community can be repurposed. We can easily transfer all assets to a new game or a marketplace. Further, that can be done across one or several titles. Hence, this option ensures that the community continues.

If you’d like to see a great “pre-launch” Web3 gaming example, check out Star Atlas:

Despite the fact that their core game hasn’t launched yet, users can already interact with each other and with the marketplace.

Immersion is the key here – the more immersive the game, the deeper and more varied user experiences. Hence, users are more likely to play for longer and more frequent sessions. If we again shift our focus to traditional gaming, the latter offers limited user engagement opportunities. Essentially, users can only engage when the game is opened and they are actively playing. As soon as they shut down their game or walk away from their computer, they are no longer engaged. However, with Web3 gaming, there are many more opportunities to keep users engaged even when not actively playing. This is typically achieved by getting players engaged in a marketplace outside the game.

We can already see a great example of this expanded immersion with Decentraland:

With the previous two KPIs covered, you now know that Web3 gaming has an advantage in attracting users and giving deep, varied experiences. This is a great start; however, to ensure a lot of long-term users, retention is the key to a game’s success. Fortunately, one of the key benefits of Web3 gaming comes in the form of improved user retention. UGC (user-generated content) plays a significant role here. As such, users are not only consuming the game but also participating by using their imagination. You can accomplish this sort of contribution in various ways. Here are some examples:

Both of the above examples can come in the form of NFTs. Moreover, games can include a vast range of other NFTs. As such, anyone can create additional in-game items and essentially own a piece of the game. Nonetheless, without UGC, it is quite difficult for game creators to create enough content when the number of users grows a lot. However, with UGC, there’s always a lot of fresh content. Also, if this enables users to earn, you can bet your bottom dollar that they’ll keep coming back for more. Of course, this aspect is already crossing over to our final KPI – user revenue.

A great example of neatly improving user retention via UGC (user-generated content) is The Sandbox:

If you are more of a video person, make sure to watch the video below. In it, one of Moralis’ experts explains the benefits of Web3 gaming:

Put the Benefits of Web3 Gaming to Use with Moralis

As touched on earlier, Moralis is the go-to tool for Web3 development, including Web3 gaming. With Moralis’ Metaverse SDK, you can easily connect Unity with the Moralis SDK. In turn, you get to cover all sorts of blockchain-related backend by simply copying and pasting short snippets of code. Such code snippets await you in one of the neatest documentation in the industry. Furthermore, Moralis provides a single workflow for building high-performance dapps. It is a one-stop platform that helps you avoid dealing with the limitations of RPC nodes. Moreover, Moralis seamlessly integrates other powerful Web3 tools, such as MetaMask, WalletConnect, and IPFS. As such, you get to authenticate with MetaMask or WalletConnect, and also upload folders to IPFS. As a result, Web3 authentication and decentralized file storing become a straightforward process. In addition, Moralis has other integrations that enable you to boost Web3 user onboarding.

Looking at the image above, you can see that the Moralis workflow has your back. As already mentioned previously, it enables you to easily do Web3 login and manage cross-chain identities and user sessions. It also offers you a way to do Web3 authentication via email or go with Web3 social login. Moreover, with the Moralis dashboard (database), you can easily access and work with on-chain data. This database also gives you a way to store off-chain data. In addition, Moralis’ SDK enables you to work inside your preferred development environment. In the case of Web3 gaming, Unity is the go-to choice for most devs. Of course, we must also mention Moralis’ ultimate Web3 API, which includes the Ethereum API, NFT API, and much more. Essentially, Moralis enables you to implement all benefits of Web3 gaming easily. So, download the Moralis Metaverse SDK today and join our weekly projects!

With the transition from Web2 to Web3, all industries will be disrupted significantly. However, the revolution in Web3 gaming has already begun. After covering the main benefits of Web3 gaming in the sections above, you can see why. Having the potential to improve all four primary gaming KPIs, it is only a matter of “when” Web3 games will be the new norm. So, if you want to be a part of this revolution, you ought to develop some excellent Web3 games. Fortunately, you can fully focus on the frontend and let Moralis cover your backend needs. Moreover, don’t forget that Moralis is cross-chain and cross-platform operable. As such, you have countless options to make your mark.

If creating Web3 games sounds interesting to you, we recommend starting with example projects. For instance, you can build a 2D Web3 game and add NFT power-ups with JavaScript. However, if you want to put your Unity skills to use, start with our beginner’s guide to Unity Web3 programming. Then you can build a Web3 MMORPG or a medieval metaverse game and spice things up by including blockchain game transactions.

Nonetheless, you may want to expand your Web3 knowledge first. If that’s the case, the Moralis’ blog and the Moralis’ YouTube channel are the places to be. Both of these outlets offer a ton of valuable content, including countless example projects that you can follow along. Some of the latest articles demonstrate how to create an ETH wallet, how to build a multi-chain wallet, and how do Web3 and the metaverse fit together. In addition, some articles explain what DeFi staking is and why Web3 is important. If you want to become a Web3 developer in no time, you should consider a more professional approach – enroll in Moralis Academy! 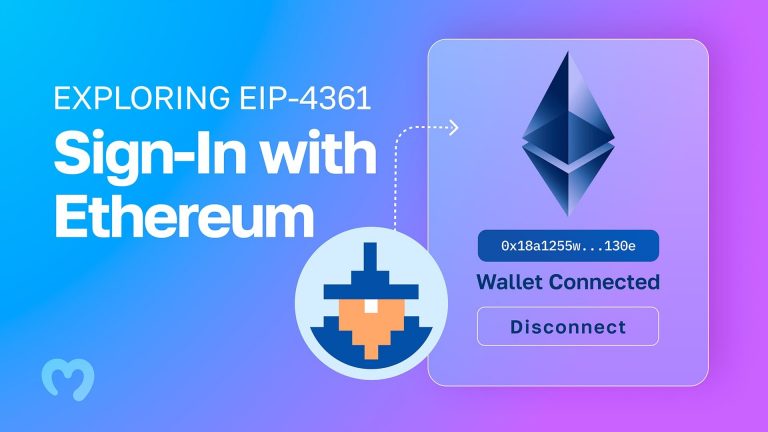 A key feature of Web3 is its blockchain-based identity layer, giving users complete control over their Web3 identity, and allowing 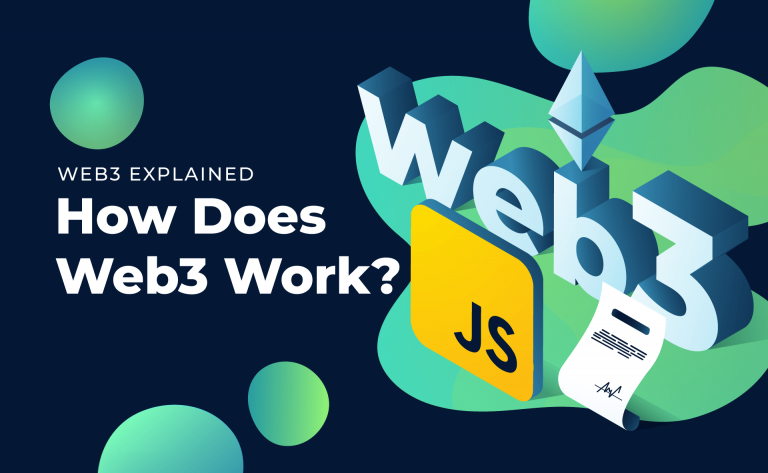 If you haven’t already, a term that you’ll come to familiarize yourself with within the near future is ”Web3”. Web3 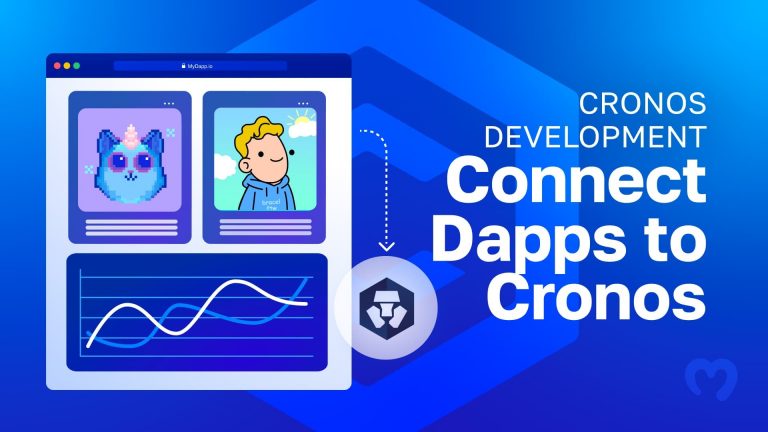 With the recently launched Cronos chain, many developers want to build and connect their dapps to Cronos. If this is