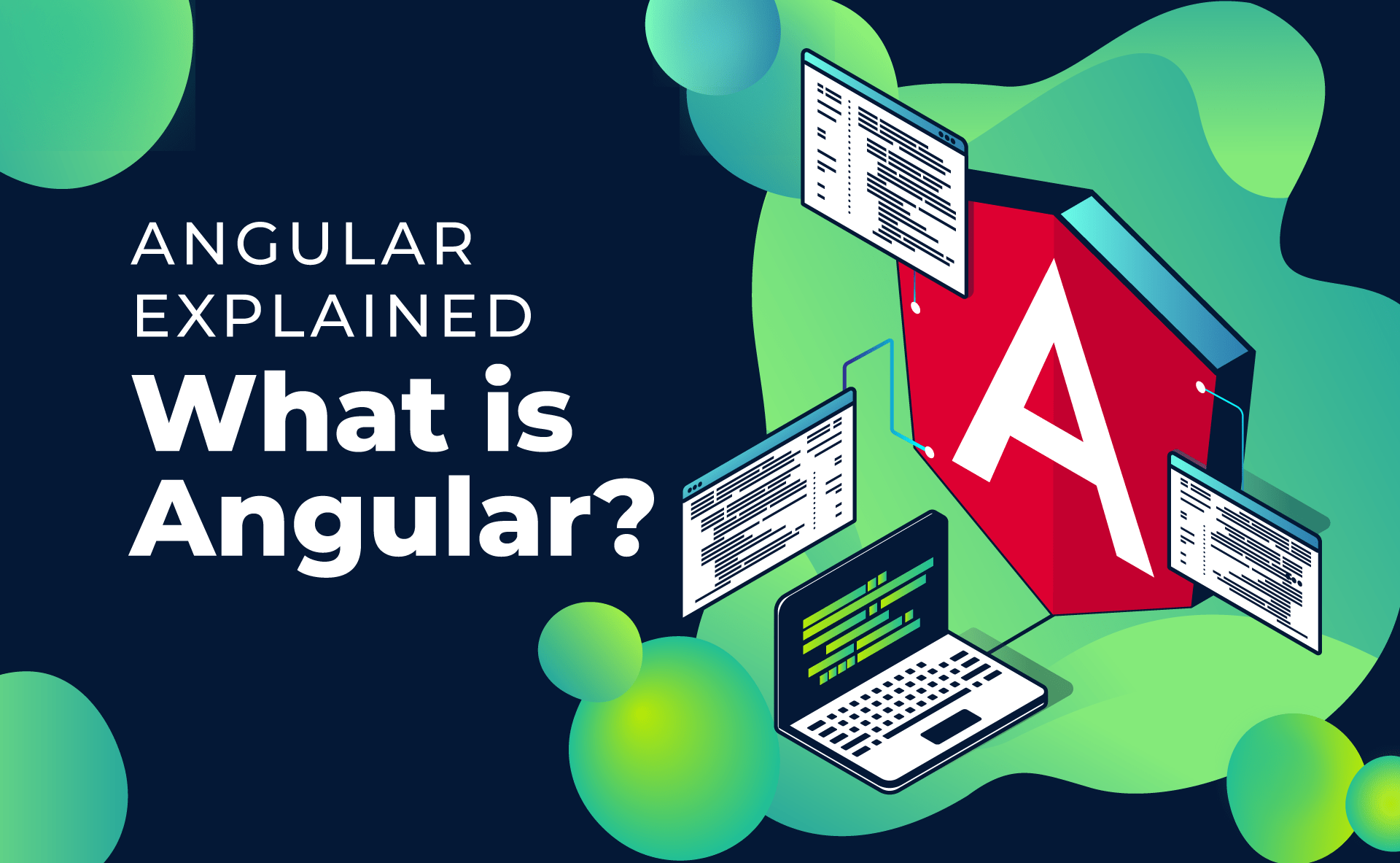 In developing dApps or Web3 apps, you may come across the Angular framework. As Angular can be helpful when you build with Moralis, let us dive into the specifics of Angular. In this article, you will learn all the basics of this advanced framework to answer “what is Angular”. This stretches from what it is to what it’s used for, its advantages, and more. All-in-all, Angular is a powerful tool for front-end developers. Moreover, it can be a useful shortcut for single-page applications creation. In addition, you will also learn about Moralis. Moralis is a powerful, next-gen Web3 development platform that enables you to put your front-end development skills to use right away. Since Moralis takes care of your blockchain backend, you get to catapult yourself into this booming industry.

Whether you are already an experienced JavaScript (JS) developer or a complete beginner, this article will provide you with all “what is Angular” related info. This way you will have a clear picture and thus be able to make your next steps with greater confidence. What next steps? Well, if you’re a complete beginner, we strongly recommend you to first learn JavaScript. This powerful coding language is all you need to start creating killer dApps.

On the other hand, if you are already an experienced JavaScrip developer, you are basically all set to start producing awesome decentralized applications with Moralis. Of course, you can also learn how to use Angular to make things even easier and faster as far as the front-end part is concerned. However, it is by no means necessary to do so. JavaScript alone is enough. Just create your free account at Moralis today, put your JS knowledge to work, and effortlessly kickstart your Web3 project, dApp, or blockchain initiative!

So, let’s go straight to the point by providing you with the most straightforward answer to the “what is Angular” question. Essentially, Angular is a development platform and a framework mainly intended for building single-page client applications (SPAs). Seeing as SPAs are very popular and highly scalable web applications, many developers like using Angular.

An impressive advantage of the Angular platform is that it can scale from single-developer projects to enterprise-scope apps with ease. Moreover, it is important to note that the Angular ecosystem has a vast scope. It consists of a highly diverse group of more than 1.7 million developers, library authors, and content creators.

To avoid any confusion, we need to mention AngularJS. The latter is also known as Angular 1 and it is the initial version of Angular. As the ‘JS’ suggests, it uses JavaScript. As the initial framework grew, the developers soon decided to create a completely new framework. This one was initially called Angular 2, however, it was renamed to Angular soon. All later versions are also named Angular (the latest version (version 12) was released on May 12, 2021).

The most important thing to note when talking about Angular vs. AngularJS is that they are based on different programming languages. AngularJS is JavaScript-based, while Angular is TypeScript-based. There are differences in their components as well. Moreover, while Angular is component-based, AngularJS uses directives instead. There are many other differences, though we will leave those for you to explore in case that interests you.

Since Angular is the one being updated, we will focus on it in the rest of the article. However, keep in mind that despite it being an older version, you may still decide to use AngularJS.

Since Angular is based on TypeScript, it is important that you know what TypeScript is. TypeScript is an open-source programming language that builds on JavaScript. It does so by adding static type definitions. Since types provide a way to describe the shape of an object, very good documentation is provided. This also allows TypeScript to easily validate if the code is working correctly or not.

Another great thing about TypeScript is that writing types can be optional. This is possible thanks to the fact that type inference allows users to get a lot without any additional code.

The Core Ideas Behind Angular

Now that you can answer the “what is Angular” question, it is time to look at this powerful framework slightly more closely. In this section, we will cover some of the core ideas behind Angular. That way you will deepen your understanding of the Angular platform and thus help you create applications more efficiently.

The essentials of Angular can be presented in three aspects: components, templates, and dependency injection. We will take a closer look at each aspect below. 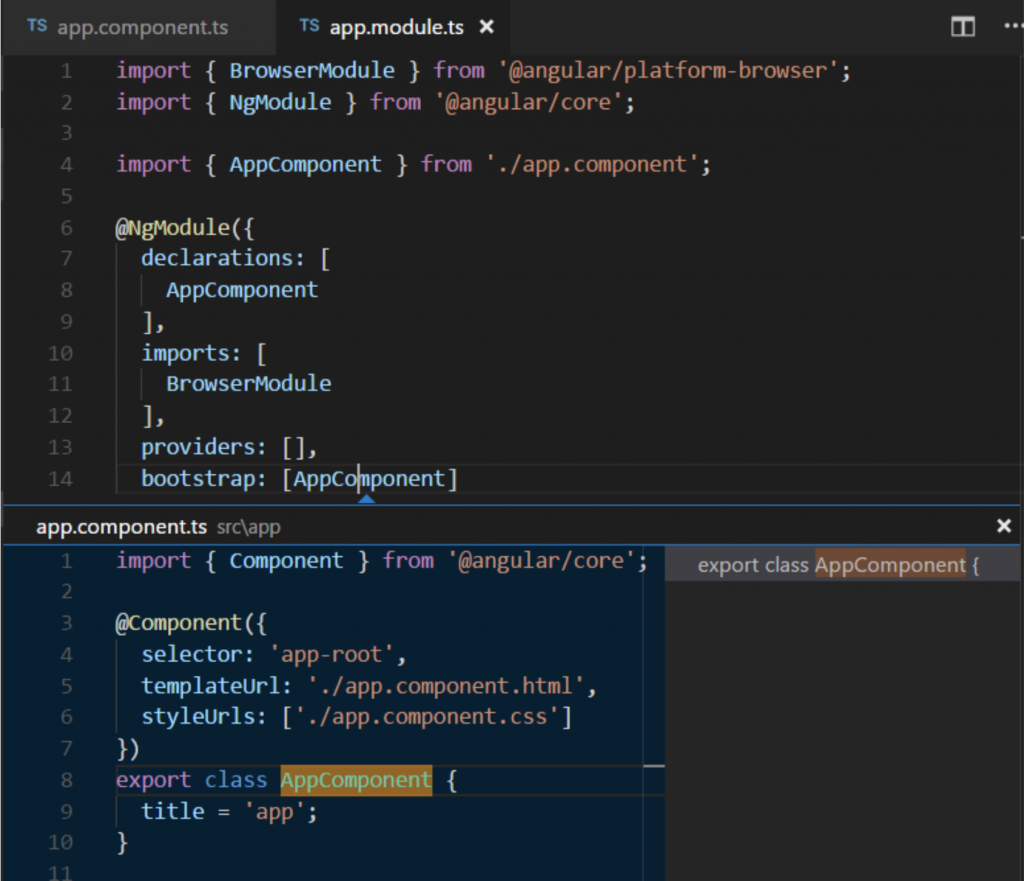 Components are the building blocks of applications. Every component includes a TypeScript class, and HTML template and styles. The TypeScript class has a @Component() decorator, which specifies certain Angular-specific information (listed below).

What does @Component() specify?

Here is an example of a minimal Angular component:

<p>This is my first component!</p>

// The code in this class drives the component’s behavior.

Using the above component is very simple. You only need to write <hello-world></hello-world> in a template. And the resulting DOM (t.i. document object model), when Angular renders this component, looks like this:

<p>This is my first component!</p>

As listed among the things that components specify, every component has an HTML template. The latter declares how the component renders. Moreover, you (as a programmer) define the template either by file path or inline.

Furthermore, Angular extends HTML via additional syntax. This lets you insert dynamic values from the component. In addition, Angular automatically updates the render DOM every time your component’s condition or state changes.

To give you a better understanding of templates, let’s have a look at the example below. It revolves around inserting dynamic text.

The above will show the message and its value comes from the component class below.

When the app actually loads the component together with its template, the user sees <p>Hello, World!</p>. It is the double curly bracket in the <p>{{ message }}</p> that tells Angular to interpolate the content inside.

Moreover, Angular also supports property binding. This helps you set values for properties and attributes of HTML elements. Angular then passes values to your application’s presentation logic. For concrete examples regarding property binding, we recommend you to visit angular.io.

As an Angular programmer, you may also add additional functionality to your templates via the use of directives. And while there are many types of directives (t.i classes that add additional behavior to elements), the most popular ones are *ngIf and *ngFor. Directives are very useful to perform a variety of tasks, in particular for dynamically modifying the DOM structure. Creating your own custom directives enables you to create a great user experience.

The great thing about Angular’s declarative templates is that they let you cleanly separate your app’s logic from its presentation. It is also important to note that templates are based on standard HTML. As such, they ensure ease in building, maintaining, and updating.

We’ve covered a lot of ground in this “What is Angular?” article already. The Angular components and templates are the key. Angular dependency injection is next on our list. According to Angular experts, you do not need to understand this portion to start using Angular. However, it is something they highly recommend grasping sooner rather than later.

Angular has a great power to handle the instantiation for you. It achieves that via dependency injection. The latter lets you declare the dependencies of your TypeScript classes without taking care of their instantiation. This built-in feature enables you to create more flexible and easily testable code.

These are just some of the highly useful tasks that Angular CLI highly simplifies.

As your applications grow, you want to add more functions. Instead of coding it all from scratch, you have the ability to use many libraries. That way your coding is simplified and a lot faster. Below we list some of the most commonly used Angular first-party libraries.

Moreover, Angular libraries are very powerful tools. They enable you to implement advanced app functionality fast. That way you are left with more time to focus on the features that make your application unique.

Use Angular with Moralis

Since you are on Moralis’s blog, you may already know what Moralis is. However, just in case you don’t, let us tell you that Moralis is the ultimate Web3 development platform. What does that mean? Well, it provides you with basically all your backend blockchain developing needs. 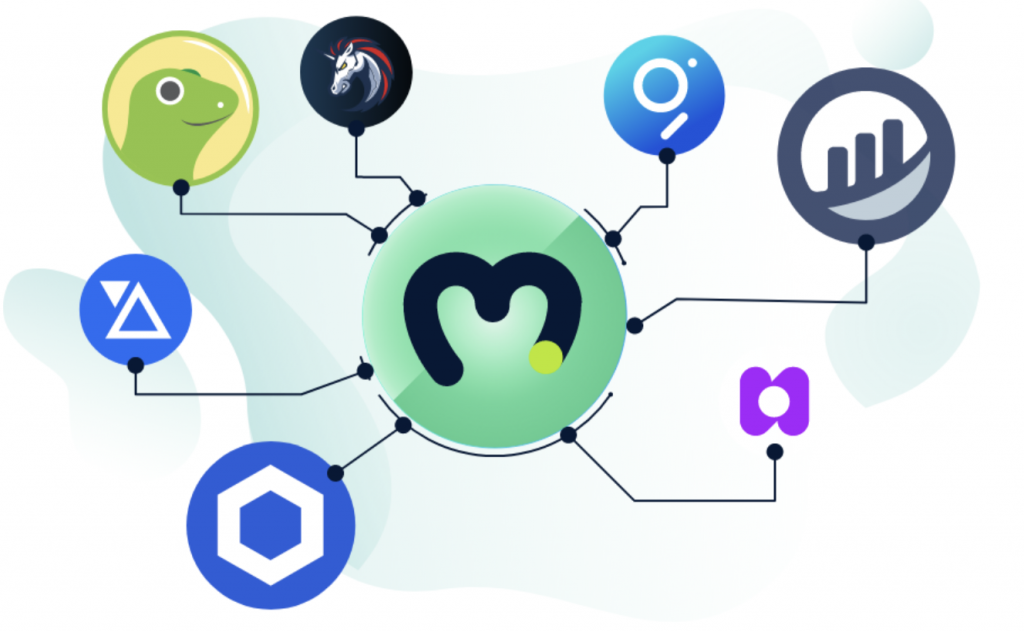 Just by copying and pasting simple Moralis snippets of code, you can turn Web2 apps into Web3 ones. And the most amazing thing about this unique platform is that it is completely free for you to get started. So, create your free account today and dig into Moralis’s clear and extensive documentation, where you can find all you need to complete your next dApp. The best place to start is a section that explains how to build a simple decentralized app in 3 minutes.

What is Angular? – Summary

At this point, you know that Angular is a powerful framework mainly used for SPAs. This means you can finally answer the question “what is Angular”. You also know that Angular’s first version was based on JavaScript and is as such now known as AngularJS. On the other hand, all other Angular visions are based on TypeScript. Moreover, we’ve also gone through the core ideas behind Angular, which hopefully gave you some solid ideas of how things work.

We really hope you’ve learned something new in finding an answer to the question “what is Angular” . Also, keep in mind that the information provided herein is valuable only if you decide to put it to good use. So what will your next steps be?

As mentioned at the beginning of this “What is Angular?” article, you need to know JavaScript to use Moralis. So, if you know JS, you may advance your front-end developing skills by also learning Angular. Then put that skillset to use by creating some killer dApps fast with the help of Moralis.